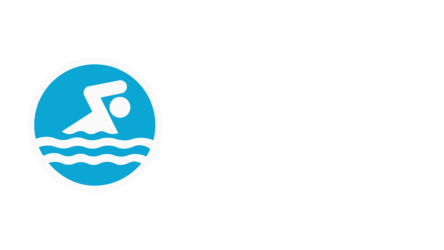 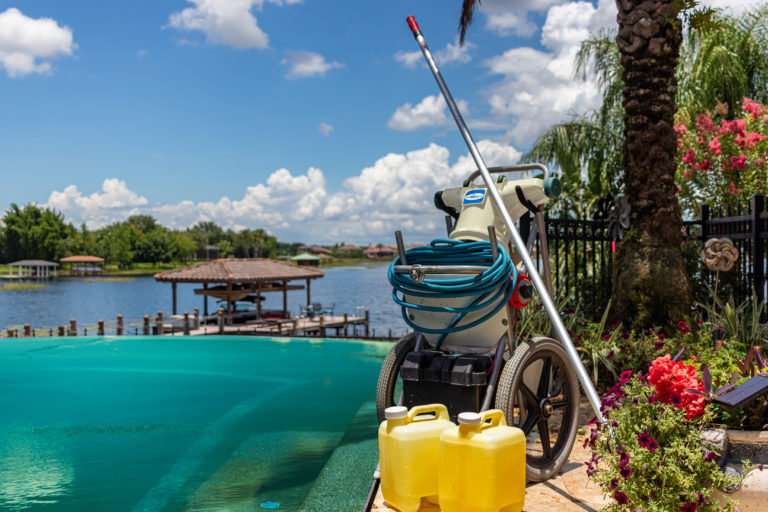 "This is your guide to understanding & maintaining your pools Chlorine levels."

The 3 main types of chlorine

The most common type of immediate chlorine delivery. These are your classic “jugs” of bleach. They’ve been around forever and are a proven method of effective chlorine delivery. Liquid is the choice of many pool owners due to its simple nature and relatively low chlorine content making it safer to store that some of the other variations out there.

It has the lowest active chlorine value of those available to us so in cases of green pools or for people with very large pools dosing can often be difficult due to the volume of liquid chlorine necessary. Liquid Chlorine also has a relatively short shelf life, losing efficacy very quickly in storage and when exposed to sunlight.

To use you simply pour the correct amount of liquid chlorine directly into the pool water and allow to dilute for several hours before swimming. In the case of shocking a pool remain out until chlorine levels return to 3-5ppm.

Commonly labeled as “shock” granular chlorine is a dry form of chlorine excellent for injecting a large dose of chlorine while using fairly little material. This makes transportation and storage incredibly easy, though if you are to store any form of dry chlorine be incredibly careful to store it in a cool and dry space as it oxidizes very quickly when wet. This generates a lot of heat and gas potentially causing explosions and fires if not handled correctly. This is also why you should avoid using granular chlorine in chemical feeders intended for Tabs or pucks. The heat and gas generated by granular chlorines end to make chlorine feeders explode. We don’t want that and you shouldn’t either.

Granular comes in many different “flavors” that have varying chlorine concentrations with Calcium-hypochlorite, Di-clor, and Tri-clor being the most common so check the label to ensure what you are getting matches with a point on the above dosing guides.

To properly add granular chlorine to your pool we recommend either dissolving into a bucket and pouring than chlorine concentrated water into the pool, or dispersing the granules over the surface of the water as evenly as possible.

For a surface with any type of dyes or pigment always dissolve granular chlorine into a bucket as over time the granules can bleach the color from the pool’s surface if they are allowed to dissolve directly on top of it.

One of the most commonly sold items in any pool store. you probably even have a bucket in the garage right now. There’s a lot of misinformation about tabs & pucks in particular as many people misuse these powerful little things. This should never be your main form of chlorination as they are almost always “stabilized” with cyanuric acid. Now this serves to actually increase your chlorine’s effectiveness however when stabilizer levels reach more than 100ppm your chlorine becomes drastically less effective as well as other chemical readings become skewed.

We recommend using tabs as a supplemental form of chlorination, as it dissolves over a period of days rather than hours like liquid and granular chlorines do. They’re fantastic for the summer months when there is tough weather and more frequent pool use as well as after green cleans to ensure you maintain chlorine reading and stabilizer levels.

You can learn more about tabs by watching this video here

First things first. Shock is not a product, it is a principal of chlorination where a pool is super chlorinated typically 30ppm above baseline. This “shocks” the pool water because it is such a massive change to the chemical balance of the water. Usually, this is achieved using granular chlorine which is why when you go to the pool store and buy shock they give you a single-serve packet. This is normally filled with a type of granular chlorine such as calcium-hypochlorite or tri-clor which as we mentioned before has a much higher level of available chlorine than liquid chlorine while maintaining the benefits of an immediate reaction, unlike tabs & pucks.

Under a proper chemical maintenance program, there’s no need to regularly shock your swimming pool. It’s a technique only to be used when necessary such as after inclement weather or frequent bathers. It’s probably a good idea after your Sunday BBQ to throw in a little extra chlorine and clean the filter to make sure you don’t run into any issues.

Explore Our Pool Knowledge Base 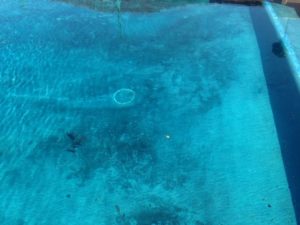 5 Ways To Prevent Copper Stains In Your Pool

Blue copper stains on a pools surface are preventable. Here are 5 ways you can prevent blue streaks in your pool now! 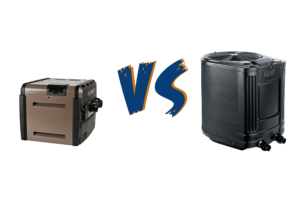 What Is The Best Pool Heater For You? 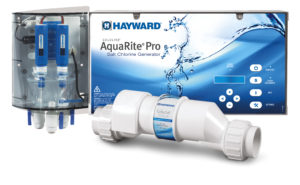 Converting a swimming pool to salt water has long been one of the best upgrades pool owners make. Lets talk about the benefits of salt and why it may be worth the upgrade for you. 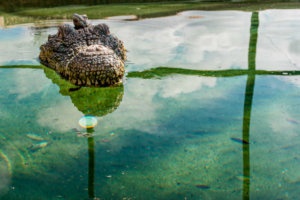 Phosphate is an incredible plant food, but in swimming pools it accelerates algae growth, turning pools green at the drop of a hat. 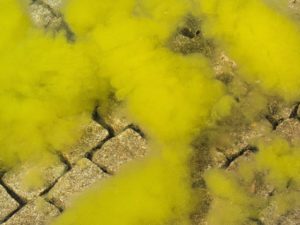 How To Get Rid Of Yellow Algae

Yellow algae is the most common form of algae in swimming pools. If you think your pool’s green, it’s probably because of yellow algae! 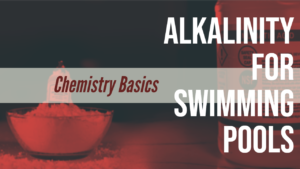 “This is your guide to understanding & maintaining your pools Alkalinity levels”

Want to Talk with The Pool Pros ? 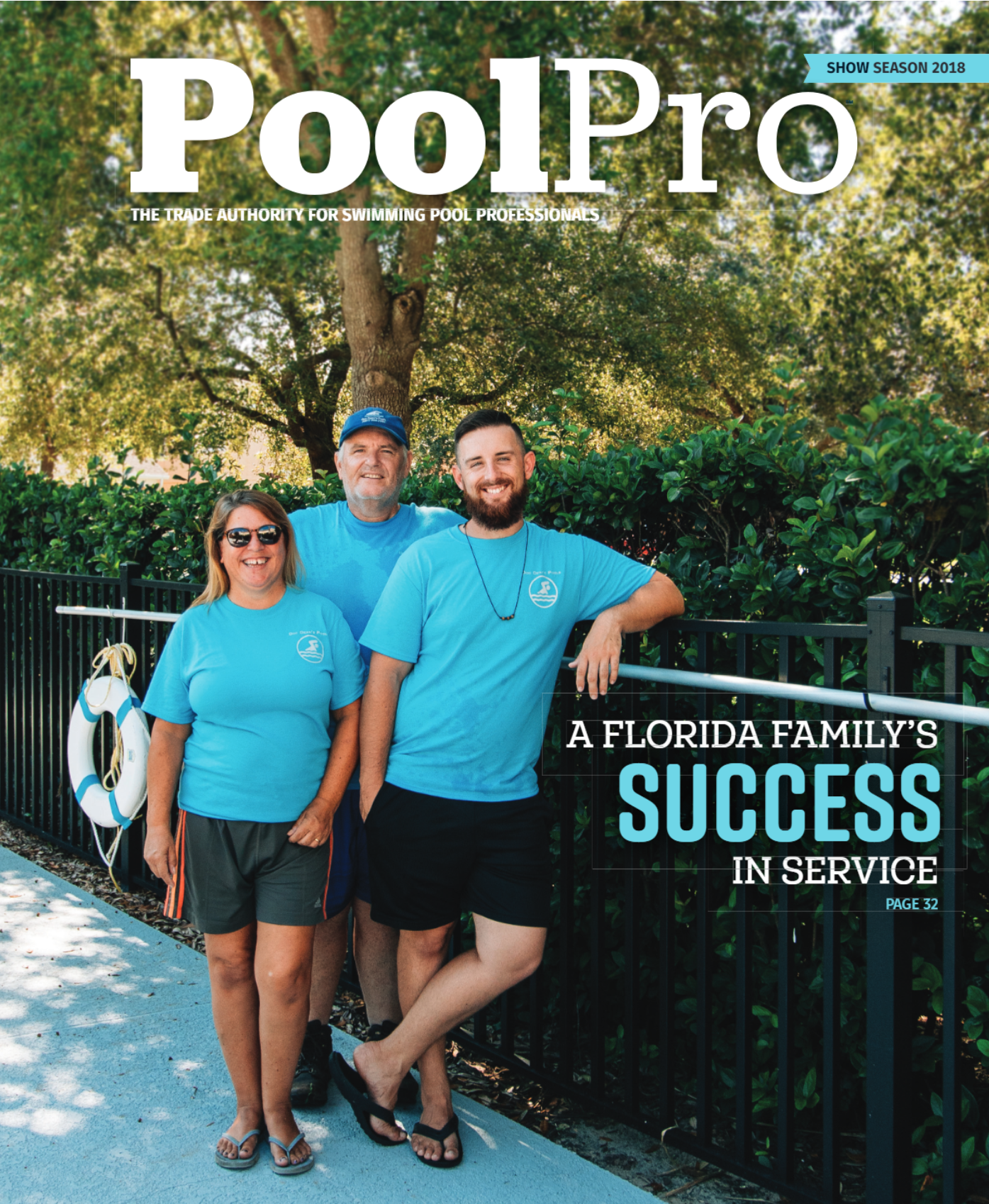